skip to main | skip to sidebar

What would essentially be my first electronics project, I chose to try and clone the monome 40h kit offered by monome.org. Reasons for choosing this: 1) it's very cool 2) you can't buy them unless your lucky 3) the arduino firmware is very similar to the atmel setup the 40h logic kit uses.

The shield is mainly a max7221 and shift register breakout, the shield plus the arduino is designed to replace the 40h logic kit. Differences in usb to serial hardware resulted in the Arduinome team writing a better firmware and software router. It now enjoys even a Wikipedia entry where you can find out more information: http://en.wikipedia.org/wiki/Arduinome 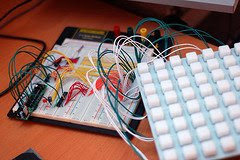 Originally laid out on a breadboard, using the ladyada boarduino as the mcu of choice the arduino monome was made functional enough to run basic monome patches and used the standard monome serial application for osc message routing.

You can see the 1st arduino monome shield I created next to the latest blue 'special edition' of which 128 were made and are in the process of being sent around the world. 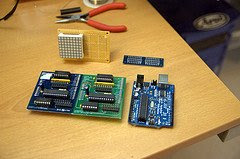 Ultimately it is the hardware side of things that interests me the mode, so an initial pcb for an arduino shield was developed. Little has changed from this initial design except the change from a pull down to pull up connection on the resistor array. 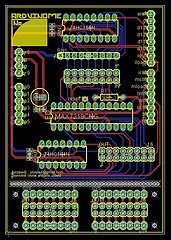 You can download the following files if you wish to make your own copy of the arduino monome shield:

I've been intrigued by the monome ever since I first came across it, even though I have no idea what to do with it. I found a mention of the Arduinone at SeeedStudio and now have found all these sources for info. This path may make it affordable for me.

Thanks for sharing your project.

Fantastic!! I have bought a couple of your shields, but I am having issues trying to find instructions on how to put it together (electrics newbie)
Can you point me in the direction of some instructions?
cheers
Marcos

I try to make a group buy at monome.org BUT although I send to the factory all the files you have here they still asking me the boarder outline!

They say it is an option in eagle that should be turned on.

"THE BOARD OUTLINE IS THE BORDER OF THE PCB A LINE THAT RUNS ROUND
THE OUTSIDE OF THE CIRCUIT SO THAT WE HAVE AN EDGE TO CUT TOO."

Sorry for bothering you but I really have no idea of electronics,and I really want to make this group buy happen.

i just send the files to seeed, although it's not according to their specs (the don't allow drill lines) they send me a corrected file together to submit with my order. you can get 10 board made for 50 dollar incl 100% e-test. highly recommended.

So JAN how does the seeed thing works? you sent the files and they basically give you the arduinome shield?